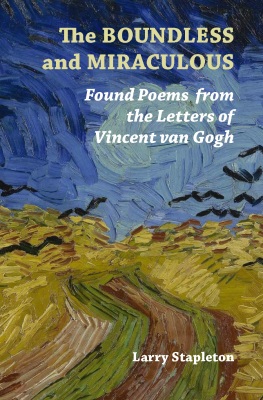 The boundless and miraculous is what Vincent van Gogh  believed we should all seek – and be satisfied with nothing less.  This is exactly what he achived in his art, despite many profound difficulties which he recorded in his letters. These letters later became recognised for their literary virtues, such as simplicity, clarity, spontaneity and rich imagery.

Such qualities are among those most prized in poetry.  In The Boundless and Miraculous, closely related extracts from Van Gogh’s letters are brought together to make ‘found poems’ – writing not originally intended to be a poem but reframed as such – here in the form of sonnets.  These record several pivotal moments in Van Gogh’s life, the content and tone reflecting his emotional state at such times.

The poems also encapsulate the development of Van Gogh’s artistic vision, notably the thought processes behind some of his most iconic paintings.  Highlighted too are his thoughts on the work of other artists – his contemporaries and those who went before him.

With 87 colour plates, the book celebrates Van Gogh’s spectacular art as well as his exquisite writing in what could be considered a series of brief autobiographical sketches.

Aimed at poetry lovers and all lovers of Van Gogh’s work, The Boundless and Miraculous was published by The Liffey Press in October 2019.

Irish Times Article for The Boundless and Miraculous

‘The book is an attractive project highlighting Van Gogh’s pleasing literary style and it also sheds light upon some of the most famous paintings ever made.’  ‘I think this manuscript has developed into an interesting and original set of poems which have their own identity yet manage to maintain the concerns and thoughts expressed by Van Gogh in his letters.’  – Matthew Geden